It is rare that you do not find a small bottle with some 'podi', to mix with hot steamed rice, in my pantry. Hot rice, a generous spoonful of ghee or gingelly oil and to mix with it a 'podi', can be a 'go to comfort food' for me. 'Podi' is a powdered and spiced mix of dhals or other varieties. I stock up on thengai podi, sambharapuli, dry coriander powder, curry leaves powder regularly. My husband's favourite is though the simple paruppu podi.
Paruppu podi is an awesome mix needing just three or four ingredients other than salt, a roasting of ingredients for few minutes and grinding them down to a powder, is all the labour required
. I have read some recipes that use roasted gram along with the staple thuvaram paruppu/ thur dhal, while there can be an added flavour by adding garlic also. What I make is a simple version with just three ingredients and salt. While I like to eat my rice just with the podi and ghee, my husband likes to add some 'rasam' to moisten the otherwise dry dish. This podi has quite a shelf life and can be stored at room temperature. This is one easy spice mix to make and store.
Paruppu Podi 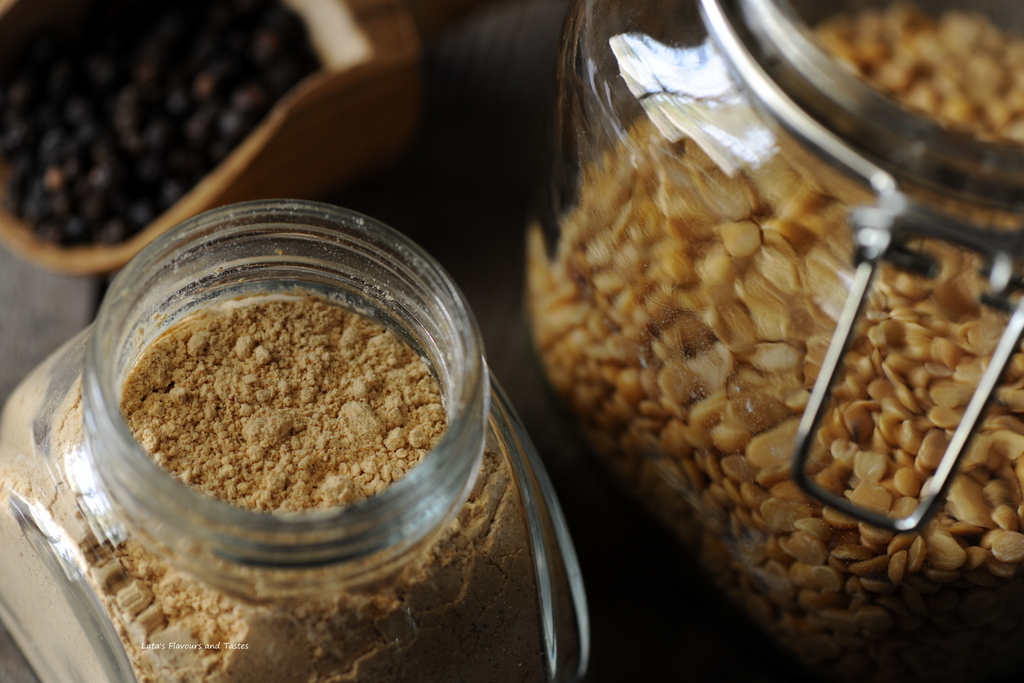 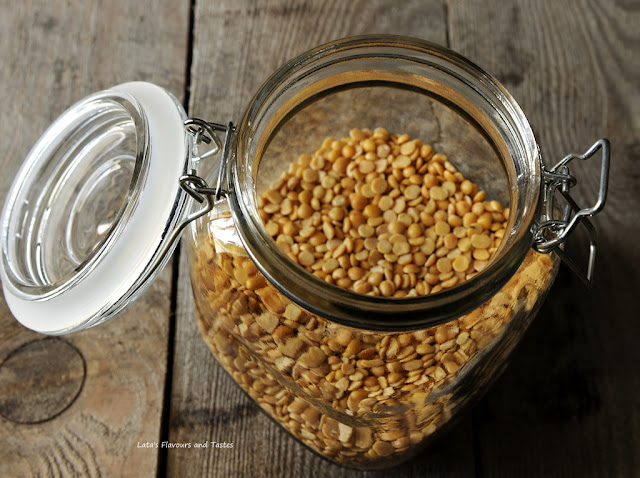 Method:
Dry roast on a medium flame the dhal until it is aromatic and slightly brown. Transfer to the grinding jar and allow to come to room temperature.
Dry roast the chillis until brittle and pepper to heat.
Also roast the salt until very warm to touch.
Add all of the roasted ingredients to the roasted dhal. Take it in a blender or spice mixer and grind to a somewhat smooth powder. It shall not be finely powdered, a little coarse texture is good. 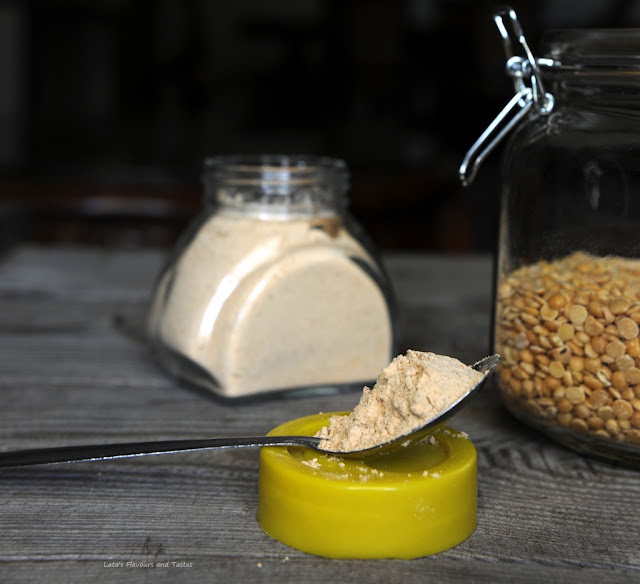 Transfer to a storing bottle or jar.
Use as required.
Serve with hot rice and some ghee or gingelly oil.
My Legume Love Affair, the original idea initiated by Susan is now being taken on and hosted by Lisa. This 85th Edition of the same event is hosted by Jagruthi. I would love to send this to the same.
Posted by lata raja at 3:49 AM 1 comment:

Email ThisBlogThis!Share to TwitterShare to FacebookShare to Pinterest
Labels: Legumes, Podis and thogaiyals, Side Dishes

Sometime last year, my daughter told me that she and her husband were trying to have a strict food and exercise regime. They would eat light and right including vegetables and fruits more. Thus, they went on a salad, soup and lighter meals weekly schedule. She kept looking for different and interesting recipes so the interest does not wear itself off. She had shared a few of the recipes, with her take on them, with me. Some of those were very doable at home; there were a few that required ingredients that I might not find locally, thus I ticked those off my to-do list.
When we visited her, she made for us, those dishes that might interest me and a few she thought were really a must try. One such dish was the Western African Peanut soup.
Peanuts grow aplenty in some regions of Western Africa and they are always a find in the markets locally. People here use peanut butter to thicken their sauces and soups. It is common to find a fish or chicken soup with a creamy thick peanut base. There are vegetarian versions and vegan friendly ones too. In Ghana, the soup is more likely to be served with rice balls, thus making it a complete meal.
Here, in Togo, one is more likely to be able to pick roasted and salted peanuts packed and sold. I have not come across raw peanuts here other than what my Indian grocer imports from elsewhere.
During the last harvest in India, my parents' driver brought them a bag of freshly harvested groundnuts and so did another lady working in my aunt's house. My mother peeled and sun dried them for days. We pressure cooked some of them fresh too. The rest dried quickly given the hot temperatures. I packed some and brought them here. I would roast them in the microwave or in a skillet, remove the skin and use as required. 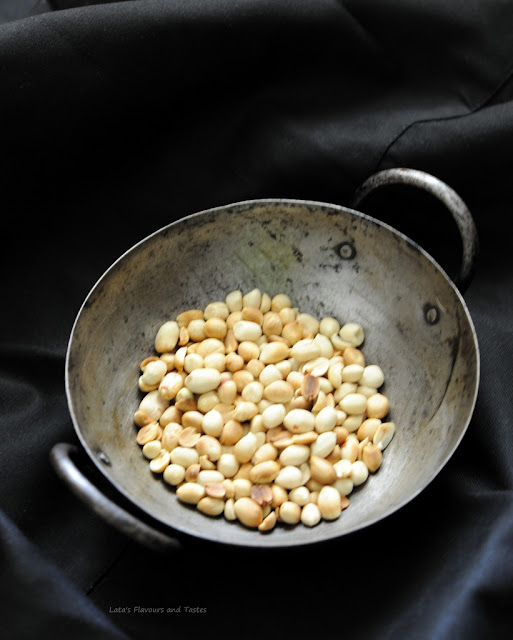 I had a lot sitting in my pantry and decided to use it up in the soup my daughter had shared. The recipe link gave many short cut ideas like using peanut butter and tomato paste. I decided to go the full length. I made the peanut butter at home and used a thick tomato puree too. Some fresh coriander leaves thrown in with boiled spinach made an wholesome soup. you may choose to leave out the spinach. I soaked and made a paste of red chillis. However, one may use store available chilli sauce also. 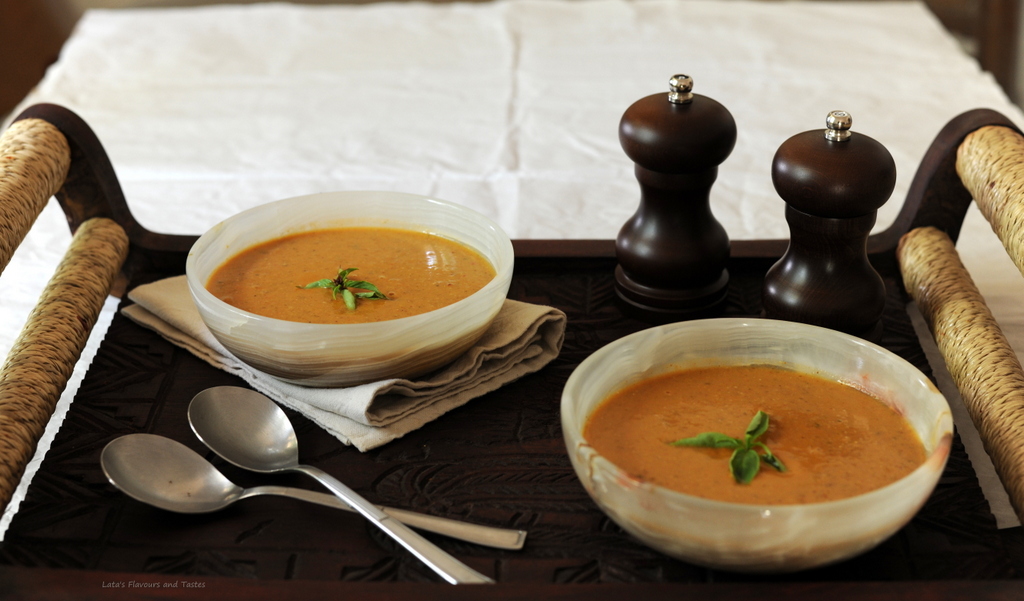 Ingredients:
For Home made Peanut Butter:
1 and 1/2 cups peanuts

Method:
For the Peanut Butter:
Roast the peanuts either in the microwave or in a skillet. I spread them on a microwave safe plate and microwave on high for 2&1/2 minutes. Give them a stire and again microwave on high for 30 seconds.
Cool them and remove skin.
Take the peanuts in the jar of a blender and pulse it, the peanuts will crush initially, then powder and on further pulsing it will become a sticky butter. You may need to scrape the ingredients down once in a while. The butter will be smooth and creamy. 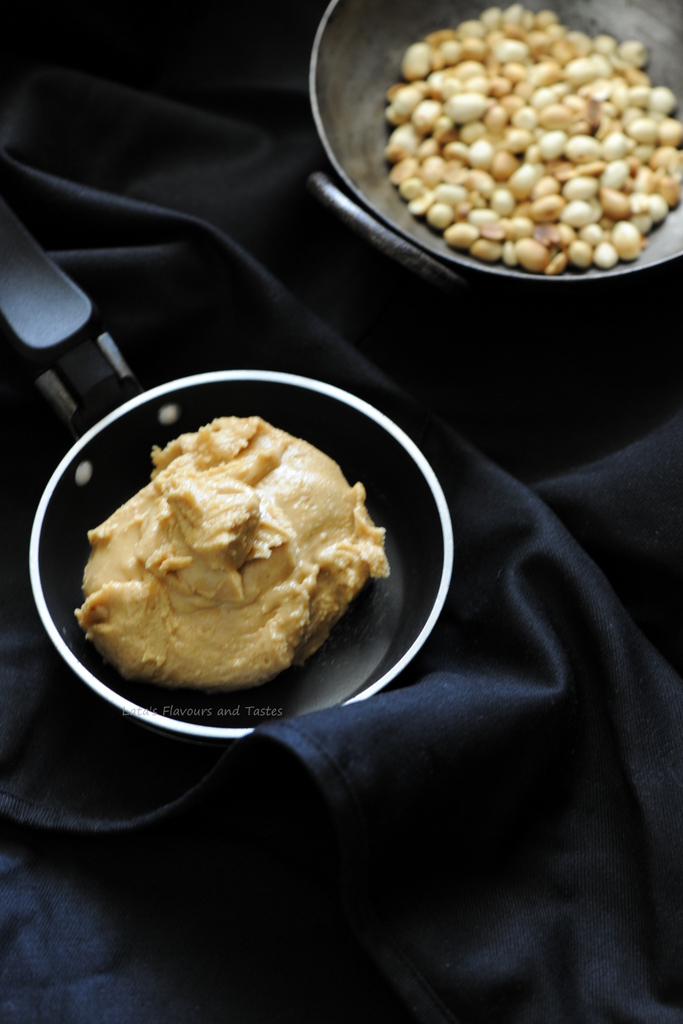 For the soup:
Boil some water in saucepan. Drop the tomatoes and leave them in until you will be able to peel the skin off.
Drain the water into a bowl as it can be used later. Allow the tomatoes to cool.
Meanwhile, boil the spinach in the drained liquid until the leaves are tender.
Soak the red chillis in some water until required.
Once the tomatoes have cooled, take them in a blender, add to them the boiled spinach and soaked chilli. Add the chopped fresh coriander also. Blend in a smooth puree. Transfer the puree to the sauce pan. 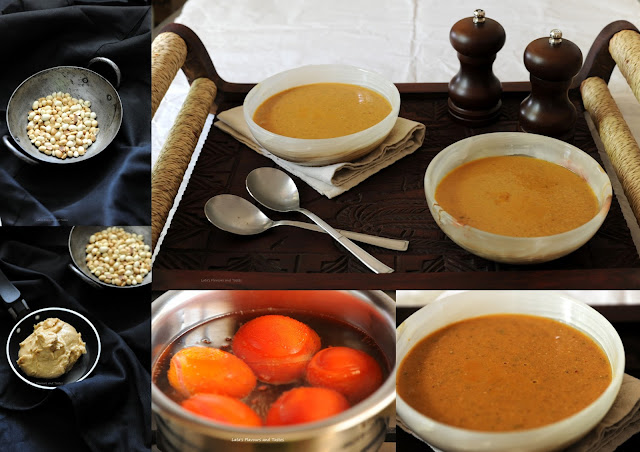 Wash the blender and reserve the water with the adhering tomato puree.
Adjust the water in the puree and allow it to boil; let the raw taste of the ingredients subside.
Mix the peanut butter to the water that you reserved along with the adhering puree. Mix well so that no lumps are found.
Allow the tomato puree to simmer further, add salt and then add the blended peanut base.
Stir constantly and simmer the soup until desired thickness is achieved. 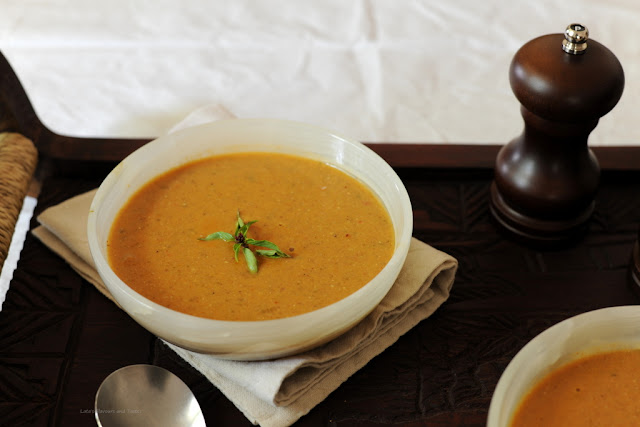 It makes a deliciously creamy soup. Adjust the salt and spice levels according to individual taste.
Enjoy a rich and warm soup as part of meal. If you decide to make the rice balls and serve alongside the soup, enjoy it as a full yet light meal.
No Croutons Required Event jointly hosted by Lisa and Jacquline. This July is being hosted by Lisa in her Lisa's Kitchen blog. My above soup is an entry to the same event.

This month the We Knead to Bake Group ventured to make steamed buns from the Tibetan region.
Aparna decided that though we are a baking group, to try a yeasted steamed bun is not treading away from norm. Thus, we are here with savoury steamed buns that are soft and mildly flavoured. While the Tibetan cooking is generally mild it is normal that they partake the food accompanied by hot sauces and curries.
Tingmos or Tingmomos are savoury steamed buns that the Tibetans have with anything from curries to hot sauces along with food or just them. They could be dunked in soups and savoured too. These are usually made small as they are consumed as part of meal. A bigger bun could be quite filling by itself.
Tingmos are similar to the Chinese baozi or more familiarly bao, bau, bakpao, bausak, pow, pau or pao, a type of steamed, filled, bun, with much variation as to the fillings and the preparations depending on the specific Chinese cuisine. They are quite popular in the Indian state of sikkim that borders Tibet while you might chance to find them offered on the menu in other eateries throughout India along side momos.
The traditional tingmos does not use yeast. However, there are recipes that are made with yeast. One such recipe is what we have tried this time. The recipe has been adapted from Rick Stein's book titled "India". He describes the ting momos thus, 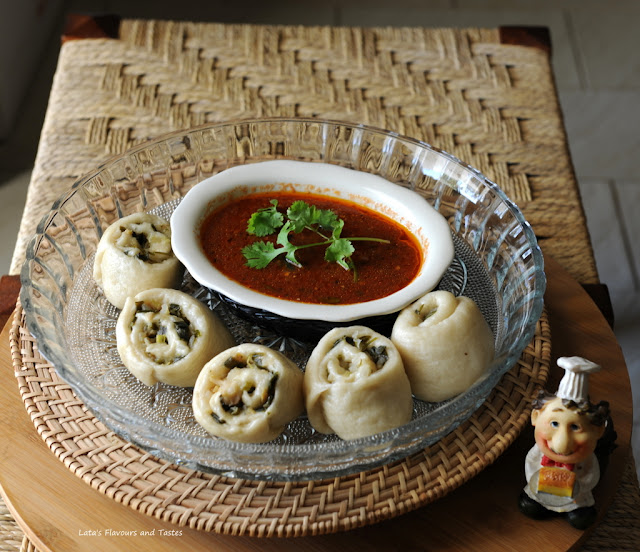 This little bun is made and eaten in Tibet usually at breakfast with a rice porridge called dreythuk. They’re quite popular though with a very spicy red chilly dipping sauce called Sepen. They can also be served with soups or “curries”. When made and cooked properly, tingmos should be soft, fluffy and slightly chewy. They are made with or without the fillings too. we have tried the same with filling.


Here’s a useful video that shows Tingmos being made.
(http://www.youtube.com/watch?v=v8OxkgWIV9E&feature=player_embedded ) 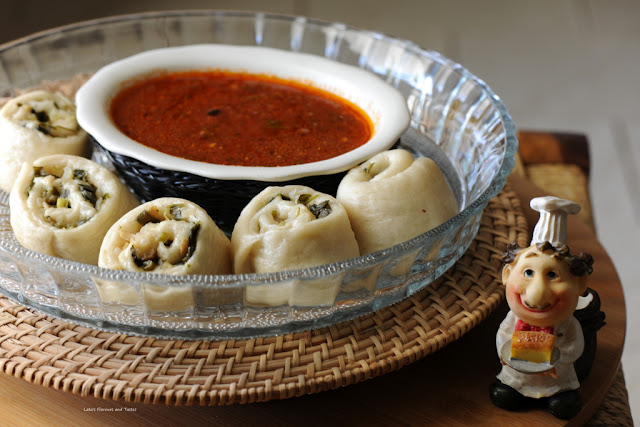 Method:
Make the dough first. Combine the flour, yeast, baking powder and salt in a bowl.
Make a well in the centre of the flour mix and add the warm water.
Knead to a soft, smooth dough adding more water (or flour) only as required. the dough shall not be sticky.
Roll the dough in a ball, coat all over by turning in oil. Place it in a bowl, covered loosely and allow it to double in its volume. This may take about 45 minutes to an hour.
Meanwhile, get the filling ready.
Heat oil in a pan and add the ginger and garlic paste. Saute' until the raw taste of garlic subsides (this step can be skipped if you do not mind the strong flavours).
Remove from heat and allow to cool. mix in the spring onions and chopped coriander.
Once the dough is ready, turn it on to a lightly floured work surface.
Divide the dough in two equal portions.
Roll each in a rough rectangular shape that is 5 millimeteres thick.
Spread the filling over the surface and roll it along the length in a Swiss roll type of roll.
Cut out six or seven equal portions of the rolled dough. 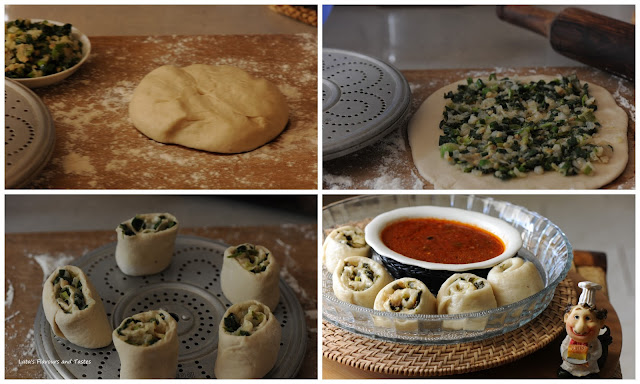 I have served them with home made Sepen style sauce. The recipe for the sauce can be read in this post.
Kindly click away from here to Aparna's post to check what other members have shared.