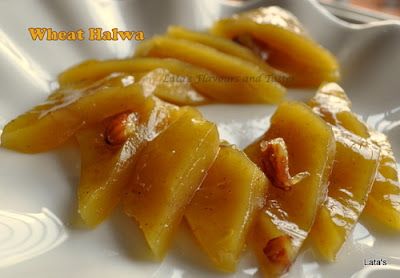 Members are trying the traditional wheat halwa this time for the Indian Cooking Challenge. Srivalli had given us four recipes that work well and we were given a choice to use any of these, while having a free hand at altering the proportions of sugar and ghee according to our taste.

The recipes that we were given can be enjoyed clicking on the links below:

Finally, my recipe of Tirunelveli Halwa adapted from the iruttukkadai recipe from this link.

Earlier, I had made the halwa which had a loose texture, that cannot be cut in pieces. So I wanted to try making the pieces.
I adapted Latha's recipe as that was the closest to how my grandmother makes viz. boiling the wheat milk and sugar mass together thus reducing it to the final consistency. This is also in concurrence with the iruttukkadai recipe. I was very used to first boiling the sugar to a syrup and then cooking the wheat milk in the syrup until desired consistency was achieved. So I opted to go this way this time on. 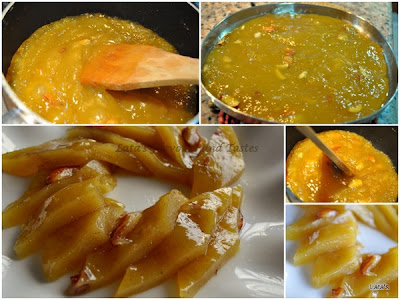 However, I found that the ghee in Latha's recipe less for my halwa, possibly because I have always had it with lot of ghee. Also I increased the sugar as suggested by her to get the pieces.
I was able to cut them in pieces and we enjoyed the halwa. 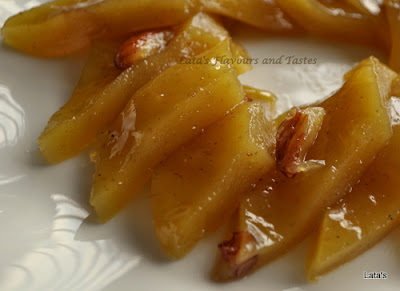 I have not written the recipe out as I am embarking on my holiday and have loads to do before I go.
All the four given recipes work well. Try which may suit you and enjoy the very delectable sweet.
Posted by lata raja at 1:12 AM 13 comments: 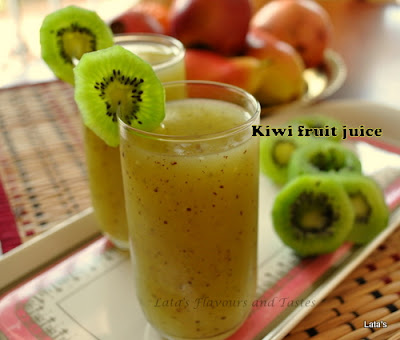 Approaching middle age, I am trying to look up nutrition and benefits of foods that we eat. Although I include lot of fruits (as many as vegetables), there were certain fruits, I had not tried. Kiwi was one such fruit that I would almost pick up from the counter and drop back. Since they were always imported into the countries that I have lived, they came with a heavy price tag, for fruits. That may have been the primary reason and the fact that the seeds were crunchy and left an after taste was another put off. Thus, I might slice just one fruit in a fruit salad or add as topping to some custard.
When my blood sugar levels read high with a deranged liver last year, I studiously looked up low sugar, low GI foods to keep my sugar levels in control. Thus I read few articles on the kiwi fruit. Two such can be read in these links here and here. Now, health concern beats the reluctance hands down and I do not mind at all paying the cost for these.
However, I will eat the fruit as such, but it is a task to get my husband have them. So I blend them in juices and get him to drink those.
Last week, for some prayer offerings, I purchased six kiwi fruits and blended few of them in juice.

Skin three kiwi fruits. Blend them in a juicer with sufficient water. Add sugar to taste.
For added taste, squeeze the juice of one medium or two small limes. Adjust the sugar accordingly. 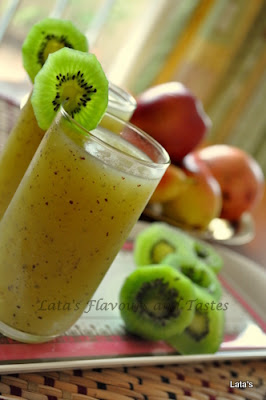 Serve chilled with a few thin slices of the fruit topped in the juice.
I do not strain the seeds after blending. But if you really do not like them, you may do so.
Posted by lata raja at 6:56 AM 10 comments: