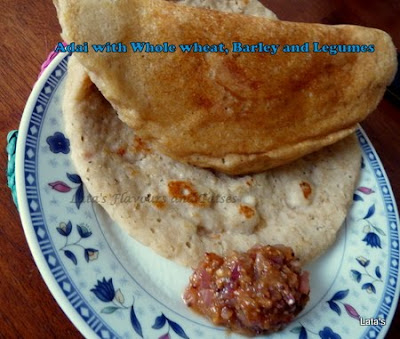 Few days ago, Viji who writes Vcuisine blog had shared a recipe for the appams using whole wheat kernels. The appams were very soft and porous and I had book marked the recipe.
I had whole wheat kernels on hand and wanted to use those up. I was curious as to how the whole wheat will alter the texture. I thought that would be glutinous owing to the wheat. She clarified that and also mailed in detail as to how long she soaked the wheat and such.
I tried them soon after and found that we liked them very much. That evening, I had some of the batter left over.That quantity would not suffice to make enough numbers of appams and so I used it to make dosais. The dosais were very soft too. Since we like such dosais as much as the crisp ones, I decided to give the whole wheat a try in other recipes such as adai.
I had powdered pearl barley for some other dish. The excess of that powder had to be used up too.
So I ventured to make adai with whole wheat, barley and legumes. I have some sorghum also in the pantry to be cleared, so that goes into this adai as well. With barley, wheat and sorghum (vellai sOlam), I did not add any rice. It is purely optional to use barley and sorghum. You may add rice with the whole wheat and not add any of these. Also if you have fresh coconut, adding that would enhance the taste.
The adai was as good as the ones we make with soaking and grinding rice, as soft and very delectable.

Method:
Place all of the four dhals in a bowl. Wash well and add some water to soak them.
Take the whole wheat kernels and the sorghum in a bowl. Wash to remove impurities and soak them in some water.
After few hours of soaking, grind the wheat and sorghum in a blender. Half way through, add the soaked dhals and red chillis. Grind all of these together to a coarse batter.
Transfer from the blender to a bowl. Mix the powdered pearl barley and salt to the batter.
The batter can be used up to make pan cakes soon after. However, you can allow the batter to ferment also, like how I prefer to do. 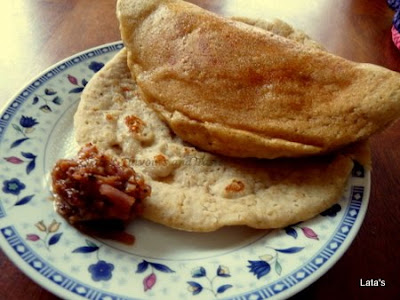 Place the flat pan, griddle or tawa on the stove. When the pan is hot, give the batter a stir and pour out a generous amount of batter on the pan. Spread lightly to a 1/4 inch thick, 6 inch wide, circular pan cake. Spoon some oil over and around the circumference of the adai.
Allow to cook well and flip to the other side. Cook this side also well and remove from the pan.
Serve these hot with any chutney of choice.
Eating this with jaggery and a blob of butter is the best way to indulge.

Siri's Healing foods event is being hosted by Simona of Briciole, the theme of the month being Whole grains. These are sent to the same.
Posted by lata raja at 9:30 AM