I cannot think of any Indian household that does not use a pressure cooker. In my home presure cooker has been around since the introduction of the appliance and it may well be even before I was born. There was this aluminium pressure cooker nice and stout that my gradmother and mother would cook the dhal for sambhar and rasam in. Many times they would use it to steam vegetables. When the idli plates were introduced, they will fit the pressure cooker and had a stand to hold four such plates, the ever versatile pressure cooker was the steamer for idlis too.
In a tambrahm household dhals are cooked on an everyday basis. So this was a regular morning scene that I remember well. Once a cousin remarked that if you lived in apartments, you may wake up to the milk cooker's whistle one after another from your neighbours and yours. Then  you will get to listen to the number of whistles of the pressure cooker.
In my parents' home they still steam cook rice,but dhals are always pressure cooked. I cook my rice in a pressure cooker, placing the rice in a bowl, not directly cooking in the cooker. I have seen it being used so much that i might think not having one is a handicap.
So much so I bought one 12 litres cooker as that was the only size available in the city i lived, before moving to Malaysia. I have hardly used it after the two plus years there that too cooking with it occasionally when we had a party. I kept using my older aluminium pressure cooker that had served well. I did not, but the packers forgot to pack it on my next move. So to Egypt I carried with the 20 kilograms luggage allowance a pressure cooker.
Living in countries where you may not get accessories, I buy extra safety valves and gaskets as I buy couplers and washers for my mixer. I am quite comfortable playing handyman with these appliances.
Jaya the Desi Soccer Mom read somewhere about a random incident of a cooker blowing up. The writer had generalised that all Indian pressure cookers explode. That rubs the cooker faithfuls on the wrong side, doesn't it? So she wants us to share our lifelong attachment to the pressure cooker. Thus this post.
I am also aware of stray incidences where the cooker had exploded. I know of a lady who was unfortunate to be around and the bits hurt her eye badly that she is partially impaired.
My mother follows her pressure cooker ritual faithfully. Before placing anything inside, she will do her checks, the safety valve, the steam vent, the gasket and the handles too. This may sound a futile exercise but necessary as the manual will recommend.
I might also say that more times than once it is the fault of the user that causes accidents. People do not use sufficient water to cooking time ratio. To avoid darkening of metal as reaction to water, they tend to place substances like a rind of a lime or a small ball of tamarind and such things. This may cause malfunction of the cooker. Pieces of these and/ or the cooking food might overflow with excess pressure and block vents. In most cases the safety valve will open, release the pressure and avert mishap. All you need is to replace the safety valve and you are good to go.
I too have, in my kitchen more than one Indian pressure cooker. It doubles and trebles in function. I have them in different sizes and use according to requirement. I try to buy a good and 'been around for years' brands and they serve me well.
I am sharing the recipe to cook the dhal as side dish for my rice. Though dhals cook without the appliance too, it is much faster and easier to use a pressure cooker. 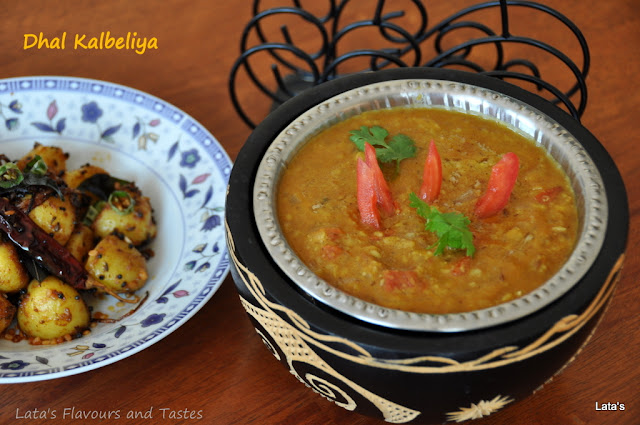 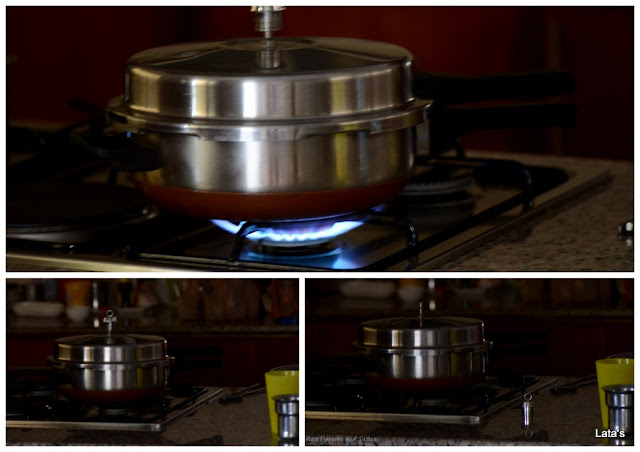 Once the pressure has reached optimum, the whistle will let the steam escape with a sharp hiss.
Reduce the heat and allow a few more whistles of the pressure cooker. Switch the heat off and wait for the pressure built inside to subside. Once the hissing has died, gently open the lid of the cooker and remove the bowl .
The dhals would have been cooked soft. Lightly mash them and set aside.
Now did the pressure cooker blow on ones face? It did not on mine!
Place a heavy bottom pan on the stove. Add the oil and heat it.
Add the cumin seeds and when they splutter drop the chopped onions in.
Cook the onions to a translucent pink and then add the chopped garlic. Toss them around for a few more minutes. 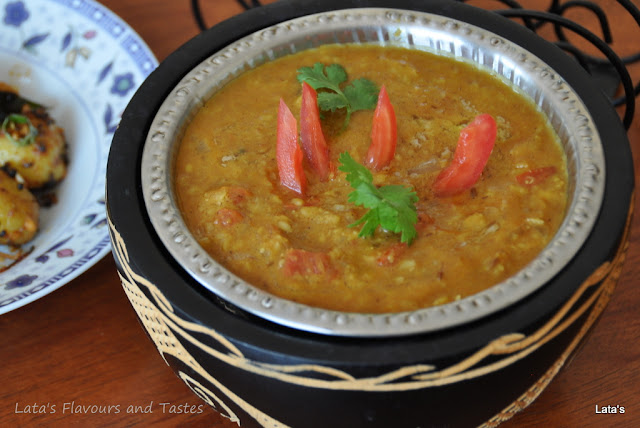 Add the tomatoes, red chilli powder and the coriander powder. Cook on a low fire until the tomatoes are pulped.
Add the mashed dhals and adjust the water. Bring to a boil, add the salt and simmer for about 10 minutes until they blend well.
Remove from the fire and transfer to a serving bowl.
Garnish with coriander leaves and the butter.
Serve hot with steamed rice or rotis.

I also cook a variety of other legumes and rice in my pressure cooker. To me it happens to be one of the essential gadgets in my kitchen. It does not blow up on my face!