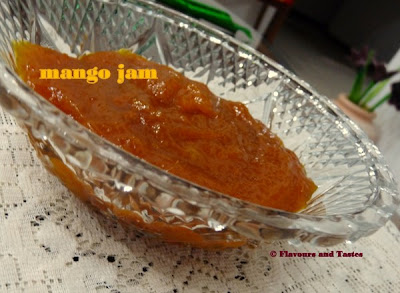 Jayashree, hosting Srivalli's MEC this month solicits tried and tasted recipes from other blogger friends. I have been trying recipes from other bloggers sometimes adjusting the recipes to my requirements and availabilty of ingredients on hand.
Living in a tropical country, I see mangoes year around. The mangoes here are big and sweet and another variety is sweet yet very fibrous. The shop lady is very generous with the mangoes, I get them at throw away prices above which my driver will sweet talk her to drop some extra :)
I chose this recipe from Aparna who I am in awe with for the baking she does. Looking through her recipes I found this one and another that I might try with ingredients on hand. I made these twice once in the jam form and the next time I let it cook a while longer until the jam hardened and I could roll aam papads. 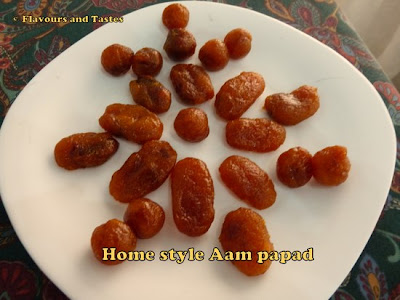 Now to the recipe: 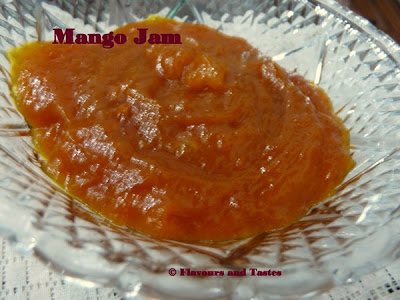 The original recipe can be read here
http://www.mydiversekitchen.com/2008/06/microwaved-mango-preserves.html
5 mangoes, peeled and chopped
¾ cup powdered jaggery/ brown sugar
1 ½ tsp dried ginger
1 tsp cinnamon powder
4-5 cloves
½ tsp salt
Method:
If you would like the preserve to be more like jam, then run the mango a couple of times in the blender.
Put all the ingredients, except the ginger in a microwave safe bowl. Mix and then cook at 100% for ten minutes. Now add the ginger, stir well and microwave at 80% for another 8 minutes. Allow the preserve/ jam to cool. It will thicken a little bit. Bottle and refrigerate. I got enough preserve to fill a medium sized jam jar.
My mangoes were quite juicy and so took longer to cook and reduce. You might have to adjust your cooking time depending on the variety of mango. Similarly, you might need to adjust the jaggery/ brown sugar required depending on the sweetness of your mangoes.
Have a look at the pictures and you will understand how well we relished this.
Posted by lata raja at 8:15 AM 25 comments: 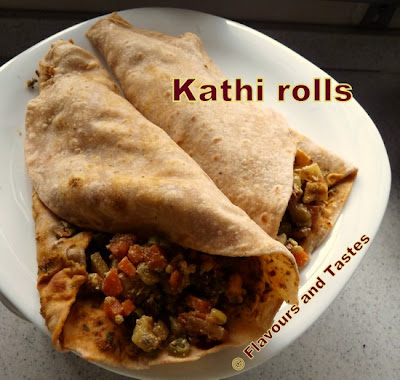 On the evening that we were returning from Chennai last December, Niki and I picked something off the Airport waiting lounge restaurant. While I had a vegetable sandwich, she chose to have kathi rolls.
That gave us some ideas to make wraps at home. Again this time she chose to make the filling and I had to roll out large chappatis to make the wraps.
She made the stuffing with cut vegetables, sprouted beans and crumbled paneer. With some spiced mint chutney to spread and the stuffing made, the wraps were a delight to have.
Ingredients:
For the filling: 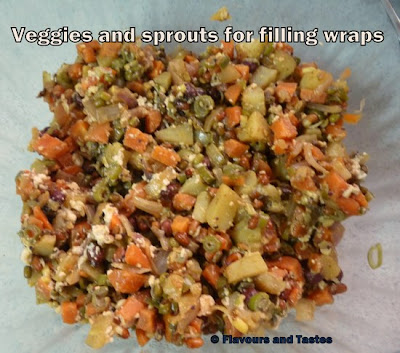 2 cups cubed and boiled vegetables of choice
3 table spoons mixed bean sprouts
1 table spoon crumbled paneer
1 big onion chopped finely
Few fresh coriander leaves
1 green chilli chopped (optional)
1 teaspoon oil
1 teaspoon oregano seeds
½ teaspoon turmeric powder
1 teaspoon garam masala powder
1 teaspoon dry mango powder
1 teaspoon red chilli powder
Salt as required
For the mint chutney:
2 fists full mint leaves
1 tomato chopped
1 onion chopped
2 dry red chillis
Salt as required
2 teaspoons oil
For the chappatis:
2 cups whole wheat flour
2 teaspoons oil
Salt as required
Preparing the mint chutney:
Wash and drain the mint leaves clean.
Heat oil in a skillet. Add the onions, red chillis and salt and saute until translucent.
Add the tomatoes and cook until tomatoes are mushy.
Add the mint leaves and toss around for a few minutes.
Remove from heat and allow to cool. Blend to a fine paste in a blender adding very little water only if required.
Preparing the filling:
Heat oil in a pan. Add the oregano seeds and the onions.
Cook the onions until soft.
Add all of the vegetables and sprouts, the powdered spices and salt. Cook until they are mixed well.
Add to this the crumbled paneer and blend it well.
Remove and garnish with the coriander leaves.
Preparing the Chappatis:
Mix the oil to the flour and salt. Knead to a soft and pliable dough adding water. Cover and rest this dough for half an hour.
Pinch out 8 large balls from the dough.
Roll them into 10” diameter circles.
Cook on a hot tawa until both the sides are done.
How to proceed:
Divide the stuffing into eight portions.
Spread a spoonful of the mint chutney over the surface of the chappati. 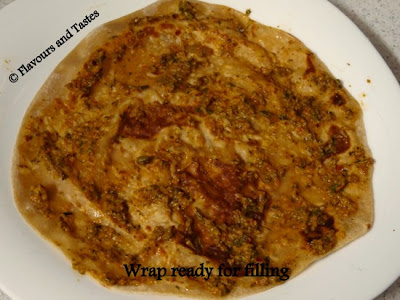 Place the filling in the middle in a vertical column.
Roll the sides over the filling and wrap in a cone. 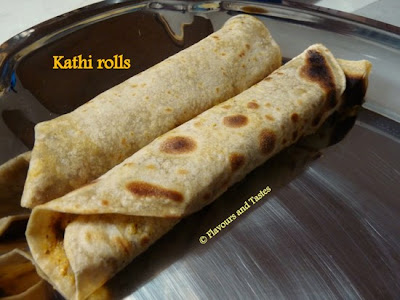 Repeat with the rest of the prepared chappatis.
Serve hot.
Posted by lata raja at 2:15 PM 26 comments:

Back to blogging with Athirasams - Indian Cooking Challenge 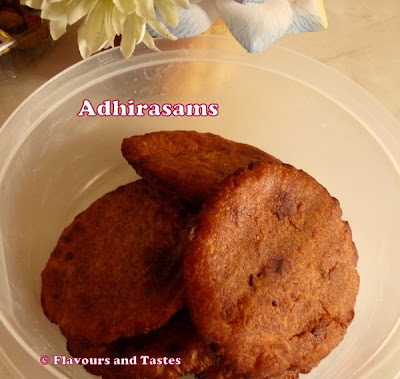 Ariselu/ Aathirasallu/ Athirasams were chosen for the Indian Cooking Challenge for February-March 2010. As with every challenge two tried recipes were given. I chose to go with the first recipe which you may read in Srivalli's blog. I skip writing the recipe all over.
I tried with just 200 grams of rice. The jaggery I used was very yielding, so I reduced the quantity to 125 grams (as against the 150 grams given in her original recipe). The result was six pieces of super delicious athirasams. The addition of sesame seeds and cooking poopy seeds are optional. 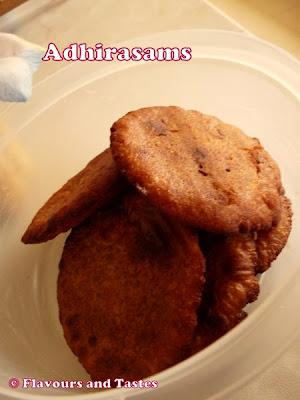 I would love to try the second recipe at some point of time.
I follow the recipe as posted earlier which works fine for me, yet I would love this for a back up; and that is what the Indian Cooking Challenge is all about - giving better working recipes that can be easily followed by most of us.