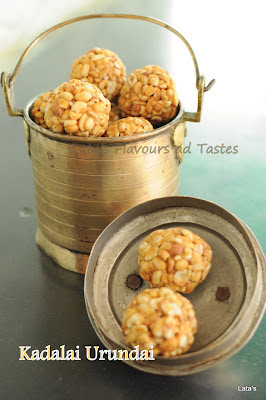 Have you ever wondered that with just two main ingredients you can have a sweet dish to munch heavily and enjoy?
Between me and my sisters, we are fond of the peanut jaggery bars aka kadalamittai.  During my primary school years, the school store would sell a cellophane paper wrapped toffee which was primarily boiled jaggery syrup that sported a few peanuts here and there. Those were not days when children were given pocket money to spend nor were they encouraged to buy anything made outside home for consumption unless an elderly member of the family chose to indulge you with such an act of whim, once in a blue moon.
In the later years, our father would buy a quality bar from a known source and we knew it was safe to partake that. That is a weakness to date and we still buy these candies often.
However, these were made at home for us whenever some of my father's clients would bring a bag of sun-dried peanuts or during the summer vacation when to engage stuff like these were made. As children we were allowed only to hold the wicker basket into which the hot hand-rolled kadalai urundais were dropped; we were to revolve the flat wicker basket in a circular movement so the balls roll around and attain a well rounded shape and also that they do not stick to each other that the molten jaggery syrup would cause them to. 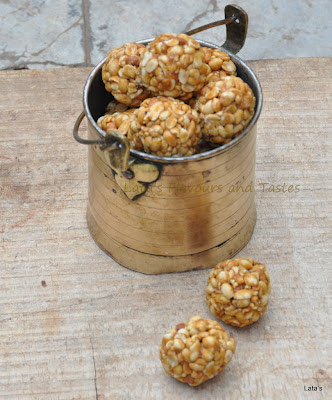 This visit to India, I could have a few urundais to bring back and thus the post!

A few teaspoons of rice flour to dust in your palms, as a measure to resist the heat and to minimise sticking of the syrup. 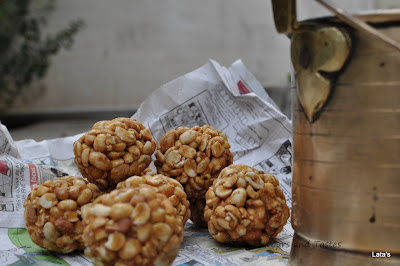 Method:
To roast the peanuts:
Place some sand (preferably soil from the river bed that is useful in construction work: as it is re - usable, there is a stock of a bag full at home) in a heavy pan and heat the same. Drop the peanuts in this hot sand and roast them evenly until the skin peels off.
Cool the same and sieve the sand off. Clean the dust off the peanuts and remove the skin.
The urundais:
In a heavy bottom pan dissolve the jaggery in some water. Once the jaggery is dissolved, strain the same for removing impurities.
Return the solution to the pan and boil it down to a hard ball syrup.
To check the consistency, drop a spoonful of syrup into a small bowl of water and try to roll the same in a ball. The ball should feel hard and when you try to drop it in the water after rolling, it should drop inside with a clang.
Quickly remove the syrup from the heat and drop the peanuts into the same. In few brisk stirs mix them well.
Dust your palm with a little rice flour, and pull out small quantities of the peanut mixture and hold in a tight fist to make a ball. Once a few have been made into shape, place them in a flat tray and gently rotate the tray in a circular motion, rolling the balls all around.
Try to make the entire stock in balls while the mixture is still hot.
Towards the end of the process, however, the syrup might harden and there will be some of the same stuck to the bottom of the pan. Reheat the pan over a gentle heat and loosen the mixture. Remove from the heat and roll them all in balls. 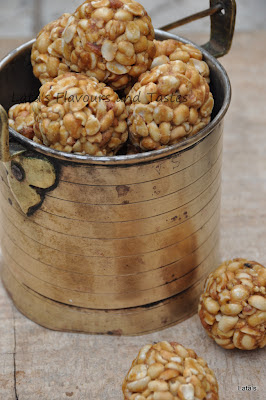 You may decide as to what size you would like your urundais to be. The ones in the picture were made for distribution in a family function and hence the size is a bit big. We normally have bite size urundais and it is more fun to eat.
You can grease your palms with some ghee and with that the urundais will acquire a shine.
Adding powdered cardamom is not a must but you may if you want to enhance the flavour.
As there is no oil or other form of fat added, this can be stored for many days at room temperature.