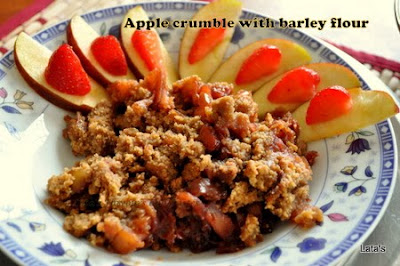 This month I wanted the free spirit bloggers to bring to the rest of you dessert recipes with some not so commonly used ingredients. I cannot say unusual ingredients, but some that are not commonly used. The rest of the FSBs have very interesting ingredients while I took an easier challenge - Barley / barley flour as key ingredient with fruits as favourable ingredients.
When my parents visited us in Johor, my then neighbour and good friend, SewLee had invited us for tea. She knew well that my parents do not eat eggs. So she baked eggless cakes, cookies and some vegetarian savoury treats for us. Her daughter had made apple crumble for us then. I recalled that and asked Sew to mail me the recipe. I was grateful that she sent me this and her apple pie recipe too.
Apple crumble with normal flour is very easy to bake and quick too. I just replaced the plain flour with barley flour. I had to make some adjustments with the flour measurements, otherwise I followed my friend's recipe for the rest. And I added strawberries too.
There were some ideas I picked up browsing the internet. I have copied the texts from the website I have linked to the same. These were pointers that helped. I have also tried the pie crust with a combination of powdered pearl barley and brown rice, which I will share at a later date. (I am leaving for India for a month's holiday, and hence my posts will not be regular.) 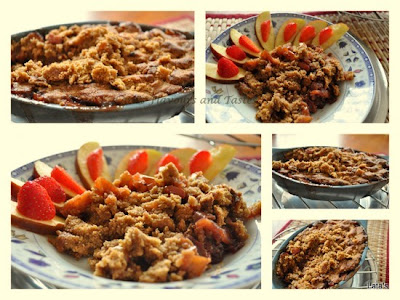 Cook together, apples, cinnamon powder and the sugar until well combined.
It is also okay that you do not cook the apples until soft. Just cook them to absorb the sweet of the sugar and the flavours of the cinnamon. I microwave cooked them for about 5 minutes. The apples were holding the crunch even then.
Mix flour and brown sugar. Cut butter into the mixture. Gradually work on this mixture with tips of fingers or with a fork.The mix will be of the texture of bread crumbs that are sticking well together.
After a while they may be slightly gathered and well incorporated.
Pre heat the oven to 230 degrees C.
Spread the cooked apples on a greased pan and pour the flour mixture over it.
Bake for 20-25 minutes. 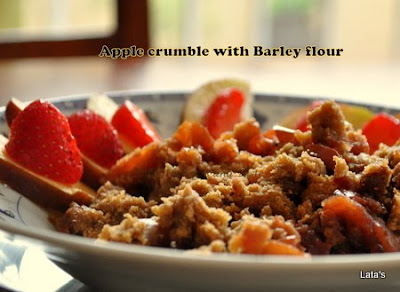 The final product will not be something that you can slice as a cake . It will be crumbly, which is why the name.
Serve as warm dessert with some fruits.

You are about to read some great treats in Anu 's, Deep 's, Dhivi 's, Mads', Mridhu 's, Nags' and Siri 's blogs. Stay tuned. I bet my last penny that they are bringing in mind blowing dessert recipes.
Posted by lata raja at 1:20 AM