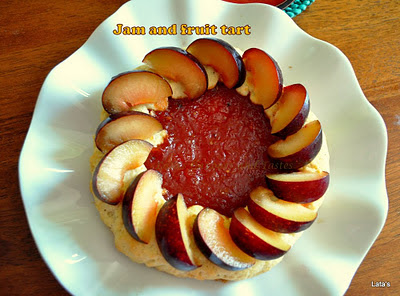 We bid the year 2011 a good bye today....a year that had brought mixed fortunes for many of us. While we rejoiced on occasions of weddings and welcoming new lives, we also were saddened by loss of near and dear ones. Such memories that the year leaves behind will stay etched for a long time.
This year also brought eight 'dare to experiment' bloggers together in a group. In April, Madhuri put the idea forth and we were game....new themes and 'out of the usual' ideas were experimented in our kitchens and shared in posts on bases of monthly themes. We skipped November and Mridhubashini put forward a very colourful theme for the eighth round, which also will welcome the new season in 2012.
Colourful??? very...for she chose to give us all each a colour from the VIBGYOR and White so we cook a rainbow of dishes. Few of us decided that we might make three dishes and my last two posts were in line with the theme for I got to make RED.

I baked this simple fruit tart with a jam centre for the dessert...bidding farewell 2011 with a sweet that isn't all too sweet but just right to enjoy.

My jam was home made adapted from my very respectable author S.Meenakshi ammal and the tart base was an adaption from LG microwave oven cook book.

I chose to make one tart, more like a pie base and fill with the jam, then decorate with red plums. I did not have a good pie dish too, hence I baked in a normal round tin, folding the edges inwards in a plait. The plum slices sat exactly on those folds and covered all the bad patches :)

Recipe for the jam: 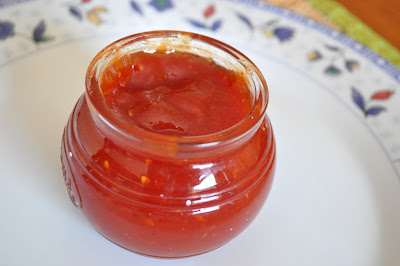 Wash the tomatoes and drop them in hot water. Place the utensil on a high flame and cook for a good five minutes.
Drain the water, allow the tomatoes to cool and peel the skin off.
Blend the tomatoes in a puree. Wash the blender jar and add the little water to the puree.
Take the puree in a heavy bottom bowl. Keeping the fire medium, cook the tomato puree until it has thicken and falls off the spoon when dropped in thick chunks.
Add the sugar, cinnamon powder and the juice of lime.
The sugar will melt and later cook and thicken the syrup.
Cook until a thick jam is formed.
This can be stored in clean jars for about a week at moderate temperatures and in the refrigerator for a week longer. There are no preservatives in the recipe and the earlier it is consumed the better. 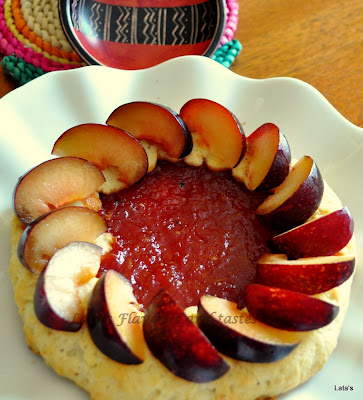 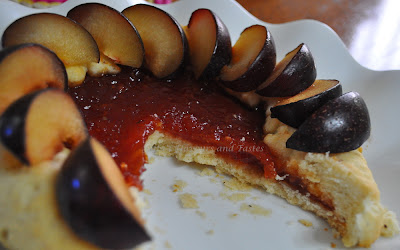 Pre heat the oven to 230 degrees Centigrade.
Sift the flour and baking powder and add the sugar to the sifted flour.
Take this in a bowl, add the vanilla essence and rub in the butter with nimble fingers. (you may choose to do it in the processor or use a dinner knife to cut in; I lost my cutting blade attached to the processor in one of the many moves, and for this small quantity the fingers were sufficient)
When the butter and flour are incorporated in a bread crumb texture, add ice cold water little at a time and form a slightly stiff dough, again handle the dough gently.
Place the ball of dough in the bowl and cover with a cling film. Refrigerate for about 20 minutes.
Roll the dough out in a 1/4" thick base, rolling gently between two sheets of baking paper or plastic.
Butter the pie plate or tin generously and dust with some flour.
Transfer the rolled out dough on to the plate.
Leaving about half an inch wide circumference spread the jam on the surface evenly.
Fold in the edges and seal the jam at the edges. The middle portion has to be left open.
Bake for 12 to 15 minutes.
Allow to cool well and shift the tart to wire racks to cool completely.
Transfer to a serving dish and place sliced fruit wedges to decorate the tart.

Now hop on to the fabulous recipes my freespirit blogger mates Anupama, Deepti, Dhivya, Madhuri, Mridhubashini, Nagalakshmi and Siri have posted to complete the rainbow. Be warned that they are sure to bowl you over.
Posted by lata raja at 11:05 PM