I had signed up for the 30 Days to Better Photos course conducted by Learn Food Photography Blog. For the duration of the course, we were given assignments on various aspects of food photography. It was required that we pay attention to the food we were to photograph, think about showcasing it as we visualise the food and so on. I had wanted to make a soup and photograph for one such exercise.
Earlier I had seen a few images of  beetroot soup on pinterest and wanted to have a go at the soup for it looked so colourful with nicely set up backgrounds in all of those photographs. I had also read somewhere that to give a good deep colour to your tomato soup all you need to do is add a little beetroot to the tomatoes. Now, if such a colour was possible, I wanted a more pink looking soup; thus I decided to make beetroot soup and add tomatoes to it for an extra tang. Now, if only I can roast those tomatoes with some herbs, would it not be a better idea, I thought and executed the same.
The result was a nice pink soup where the sweet of beets were balanced with the slightly sour tasting tomatoes and a hint of herbs in it.
In one of those many recipes I looked up, there was one which had some cheese added to the soup. While I do not relish cheese so much, I still wanted to give it a try. I only had some paneer/cottage cheese cubes on hand and thus used them. It was a good addition as it gave an added ingredinet soft to bite and chew as you sipped the soup.
Where I live the only seasons that change are summer, hotter summer and downpours that can open the skies up. So I have to make soup whenever I feel like as the weather is not going to change and throw some chillness to enjoy a warm soup. 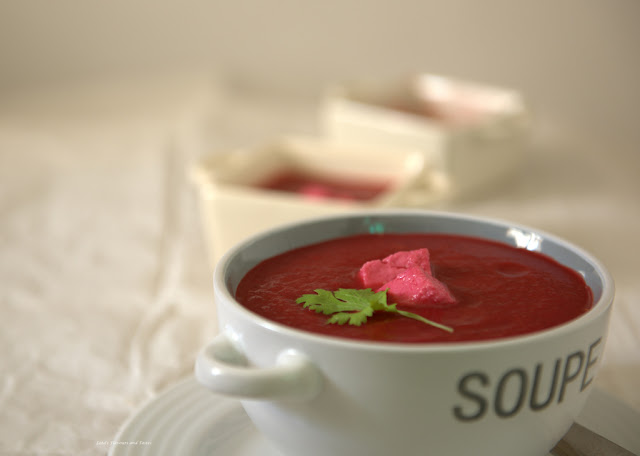 
Method:
Peel the beetroot and cut  them in small cubes.
Crush the garlic.
Halve the tomatoes and fill the crushed garlic and the herbs in these.
Rub the 2 teaspoons olive oil around the tomatoes, place them in a baking tray. Oven roast them in a pre heated 200 degrees C oven for half an hour. 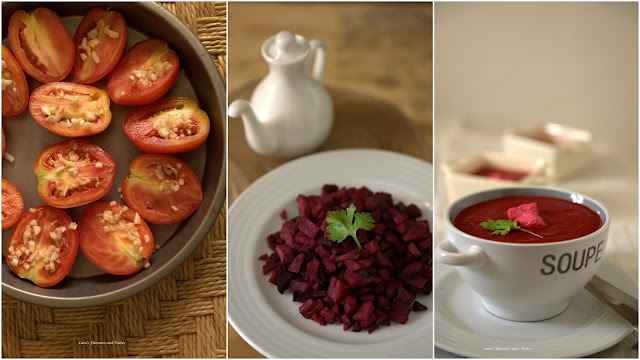 Place a pan on the stove, add the oil and toss the sliced onion until they are slightly transparent.
Add the beetroot and the water or stock. Cover and cook until the beetroots are tender.
Once the tomatoes are roasted, cool them and remove the skin.
Add the tomatoes to the cooking vegetables and cook for a further five minutes.adjust salt and the black pepper to taste.
Switch the heat off. Allow to cool and puree in a blender until smooth.
Adjust the level of liquid by adding some more water if necessary and pour it back into the pan. return the pan to the heat and cook until the desired consistency of soup is obtained. 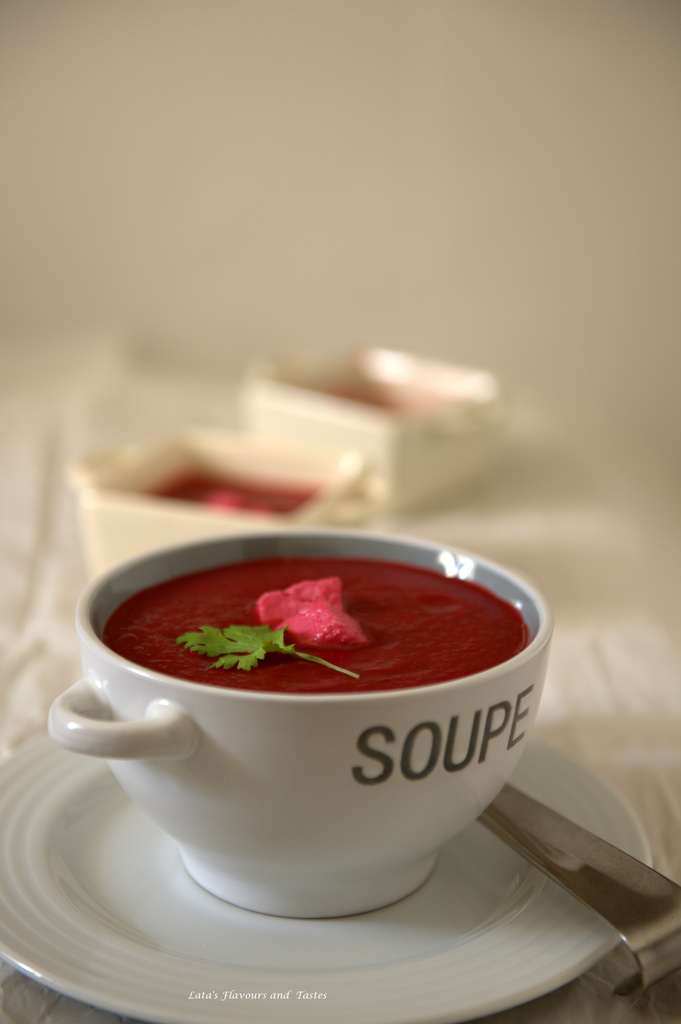 Drop the cottage cheese cubes while the soup is thickening so they absorb the flavours and become tender.
Serve warm.