I have been contemplating whether this is indeed a milestone post or not. The numbers mean as many recipes??? Well, nearly. I pat myself, aha! I can cook this many, great. But what these few months of blogging has given me is much, much more. It has been lovely and lively interacting with loads of blogger friends, some with a little more attachment and so on. It is worth celebrating then, don't you think?
To post a recipe to mark this was a task. There are a few posts to see the light of blog sphere, most of them are in pictures, write-up pending. So I took the suggestion of the two people who have been eating these most part of their lives...my husband and daughter. They came up with the idea of putting up something I cook and collectively we relish, which in itself is a difficult task. My husband used to be a pick and choose eater until recently. So it could have been a potato dish if he had his way. Niki is fine with most veggies and such. They came up with the two dishes for this post and here I am posting it for them.
Badam Halwa: 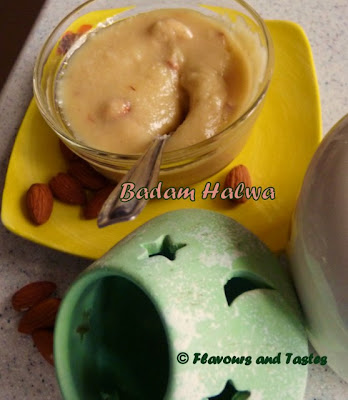 At home, when we were young, our grandmother and mother would indulge the three of us with different sweets prepared for different festivals. They used to make our choicest of the lot.
It used to be wheat halwa for Bhoghi, obbattu for Ugadi ans so on. Somehow, they never made badam halwa.
There was one Arya Bhavan near the Rajaganapathy temple in Salem. Appa used to buy this from there, just like bakes from Henry and Woolsey the famous bakers of Salem. The halwa used to come in tiny packets, wrapped in butter-paper, sweet and in a nice yellow colour. We love them.
Later I learnt from few cookbooks to make badam halwa.
Now this recipe works well for me and hope you will enjoy this too.
Ingredients:
1 cup almonds
1 cup sugar
1/2 cup milk (toned for low fat version)
Few strands of pure saffron
1/4 cup ghee
Method:
Soak almonds in hot water for about 20 minutes. Blanche them and using the milk grind to a fine paste.
Dissolve sugar in some water and boil until you achieve a thick syrup.
Mix the strands of saffron in some milk and dissolve them.
When the syrup consistency has been achieved, add the almond paste to it and stirring continuously allow it to blend well. Add the dissolved saffron too.
Cook the mix well adding the ghee in small portions until they come well together and start leaving the sides. Switch the fire off immediately. The halwa will still be semi solid but will thicken as it cools. Let the halwa reast in the same utensil for some minutes.
Transfer to a different container to store.
Garnish with roasted cashew nuts. You may also add cardamom powder for flavour but not necessarily.
Use of milk for grinding is optional, though that helps reducing quantity of ghee. Also as almonds have some fat content, ghee can be adjusted accordingly.
I usually serve this hot by heating small portions in the microwave.That makes it very indulgent, finger-licking good :)
Arisi Vadai: 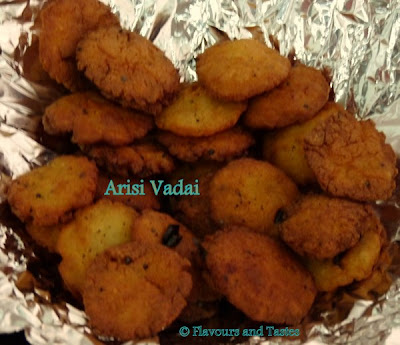 This is the one vadai most of my mom's family memebers (my maternal grandma's daughters and daughters-in-law) make for Saraswathy pooja without exception.This is yet another very indulging dish from my grandmother's kitchen.
This year one of my cousin's wife, Priya manni sent this dish to Radio mirchi and won the first prize!!!
My mother makes them coin size and we just grab in fistfulls no end! We had our friend over for dinner the night of this year's Saraswathy pooja and he tried to take these with rice instead of vegetables:) I guess that I have piqued your interest enough that I should get to the recipe now.
Ingredients:
2 cups rice flour ( prepared by soaking rice and pounding it; you may use store bought flour too)
2 level cups water
2 tablespoons thuvar dhal
1/4 cup yoghurt
3 tablespoons fresh coconut, scrapped finely
6 green chillis
1 tablespoon channa dhal
2 teaspoons mustard seeds
few fresh curry leaves
2 teaspoons oil for tempering
Salt to taste
Oil for deep frying
Method:
Soak thuvar dhal for an hour, drain and grind coarsely along with coconut and chillis.
Soak channa dhal in some water for some time. Drain and keep aside.
Heat the oil for tempering in a heavy bottomed kadai, temper with mustard seeds and curry leaves. Add the channa dhal and toss for two minutes before adding the water.
Add the yoghurt, salt and the thuvar dhal paste, stirring well.
When this starts boiling, reduce heat to lowest and add the rice flour. Blend them well to form a lump that a small portion of it rolls between your fingers.
Take off the fire. Cool and knead well to obtain a lump-free, smooth dough. Make small balls and flatten them like discs. Small and medium thin discs that do not crack at edges should be the correct texture. You might sprinkle some warm water if necessary, but exercise caution, more water results in oily vadais.
Heat oil in a kadai and deep fry the prepared discs over medium heat, turning them around. Remove with a slotted ladle once the vadais are crisp and golden brown.
These vadais will stay crisp for few hours turning soft and chewy later. But both ways they taste just as good.