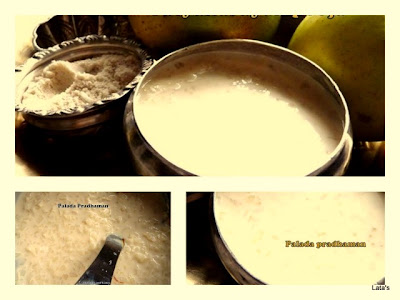 In an earlier post, easy adai payasam, I had made the payasam using coconut milk. I had learnt to make the palada from a neighbour while I lived in Chennai. Then, my father used to purchase the ready made ada from a shop in Coimbatore and I used them whenever needed. It never crossed me to make some and store at home because I was always making them then for just one time use or was doing with the store bought ada.

Recently Jayasree posted her palada from scratch. That got me enthused to make some ahead and store in my pantry. She has used a vadam stand to make a whole batch of them. As I do not own one such stand I have made them spreading on flat plates like in my earlier post.
I had loads of sunshine in Ghana. Hence sun dried them and stored in a bottle. Now, months on they have kept well in spite of having sat inside a shipment container subject to all weather conditions.
The pradhaman this time was with creamy milk and was made to mark the Thamizh varusha pirappu, the advent of the new calender year.

The demo for making the adas is well illustrated in Jayasree's post. Have a look and then mine if you want to see how to make them even if you did not own a vadam stand :) In my picture you may find the pieces a bit broader, but they shrunk as they dried and are perfect as you see them here presently. 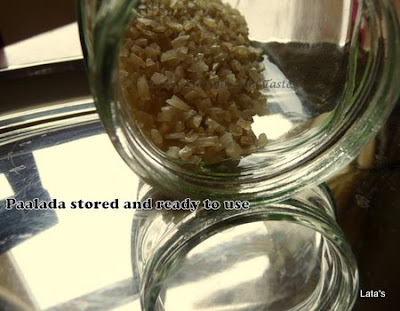 To serve just two I have made with reduced quantity of the ingredients as listed below. Ideally, with 2 litres of whole milk and related ingredients you may well serve six to eight servings.

Ingredients for the paalada: (yield will be about 2/3 rd of a cup of final product)
1 cup Raw rice
Very little salt
2 teaspoons Sugar (totally my idea to make them a bit sweet)
Ghee or oil to grease the plates very lightly


To make the palada:

Wash the rice and soak it in water for an hour. Drain and grind to a smooth paste adding the salt and the sugar. Grind to achieve a batter that is slightly rarer than dosa batter, but not too thin. You should be able to spread the batter in a thin film on a flat plate.

Keep the steamer with sufficient water. Meanwhile prepare a few flat dishes ready by greasing them with drops of cooking oil or ghee.
Pour small ladles-full of the batter on to this and spread evenly over the surface. Steam this for a few minutes one plate at a time. I steamed for around three minutes each. The edge would partly be lifting off by itself around this interval.
Gently remove the cooked ada from the plate. Place the next to steam and so on. you may reuse the same plate over and over until all the batter is done.
Allow the ada to cool. Chop them in small pieces. Spread them over a clean sheet and dry them in the sun. After about four hours turn the ada pieces over, if they have not sufficiently dried. Take care before storing that they are dry, lest you have them growing mould within few days of storing. 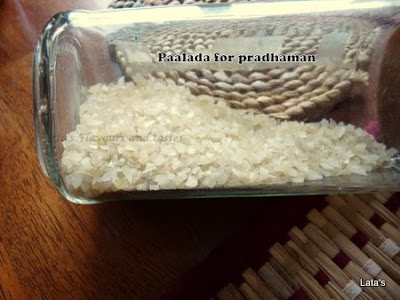 This is how the ada looks after drying and this is what we will use in the pradhaman below.

Take about a litre of water in a slightly deep bowl. Bring to a boil and add the ada to the water. Cook them until they are soft.
Meanwhile, in a heavy bottomed deep pan boil the milk. Reduce the heat to the lowest and continue simmering until the milk reduces in volume to 3/4ths of the initial measure.
Drain the water from the ada and add to the simmering milk. Continue to cook further, stirring constantly, until the ada soaks in the milk and the mix is creamy.
Regular stirring is required so that the milk or the mass does not settle to the bottom of the pan and burns.
Add the sugar and continue the cooking until the ingredients blend in a thick creamy mix. 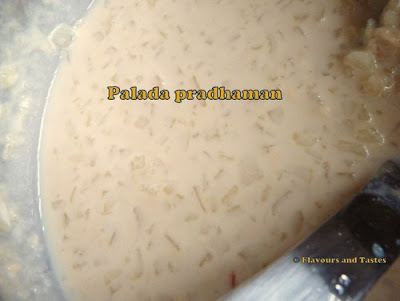 This is a long drawn process, but worth the effort as the pradhaman is a delicious treat.


I am sending this across to Priya's space hosting Nivedita's 'Celebrating sweets event' with Rice sweets.
Posted by lata raja at 8:50 AM