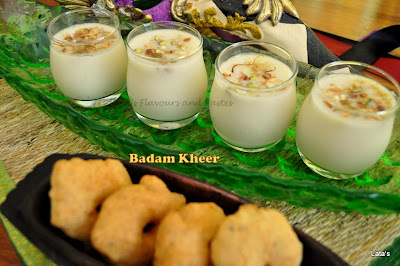 Time and again, I set myself the task of reading the Sundara Kandam from the Valmiki Ramayana . There are a few set reading rituals as ordained by our elders viz. read all 68 chapters in one day, split them over two/three/five or nine days and so on. Recently, I did the reading and on the concluding day I desired to make some sweet and some urad dhal vadais for offering.
It so coincided that on that Saturday, I wanted to also try my hand on the 'one day vegan challenge' set by Harini.
Pondering upon the sweet dish that I might make without the use of any dairy and coconut (as I had already done an overdose of coconut usage for one day), I remembered the kadalai paruppu payasam in S. Meenakshi Ammal's Samaiththu paar volume two. That recipe uses milk and I was sure I can skip the milk and use almonds to compensate the lack of the same.
During the initial days of my working, the staff of our office preferred to party at a particular restaurant that was just a stone's throw from the office building. Mostly it was a Saturday lunch and invariably the featured sweet dish was a poor attempt at Badam Kheer, which we always detested having it there. We used to jokingly discuss the ingredients and preparation. On one such occasion one of the senior staff recognised that it had the flavour of gram flour. Then on we would joke that it was water added gramflour to which few drops of essence and food colour was added.
However, during the later years, I discovered that indeed you could make a faux badam kheer with grinding bengal gram and milk, add few drops of essence and it works!
Now I had the task of not using cow's milk on that day and I took a look at the recipe in the book.
The author had suggested that if you add a few almonds and grind it along with the channa dhal, it would taste as nearly as badam kheer which has a thin consistency, yet delicious in taste.
I set out to try the recipe substituting the cow's milk with almonds that were ground to a fine milk texture. The result was quite an amazingly rich kheer that had the real flavour of the almonds and the roasted gram. The consistency was that of a drinkable kheer, thicker than badam milk, but not quite thick as regular payasam/ kheer.
For the garnish, I dry roasted on a very low flame the chopped cashews and pistachios. 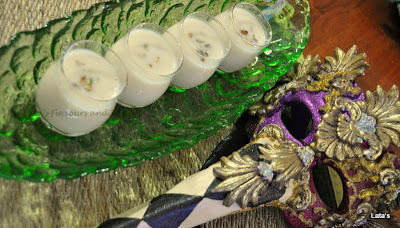 Cooking Procedure:
Soak the almonds in very hot water for a few minutes. When the water has come to room temperature, skin the almonds and discard the water and skin.
Soak them again in one cup of very warm water.
Meanwhile, heat a pan and add the channa dhal to it. On a moderate heat, toss the dhal until it roasts to a golden brown and gives away a strong aroma.
Soak the channa dhal in another bowl in one cup of water.
When both the almonds and the dhal have cooled, grind them separately adding the same water that you soaked them in. the pastes should be very smooth and of fine texture.
Take the ground channa dhal in a bowl. Mix some water to make a very thin liquid and place this on the stove.
Also in another bowl take the ground almond milk and bring that to a boil.
Stir both the liquids frequently to avoid them getting burnt. Simmer both until the raw taste is lost.
Then mix both the liquids in one of the bowls, stir in the sugar and cook until the sugar dissolves.
Then add the cardamom powder and the saffron strands. Allow the mixture to thicken a bit.
Without any fat, dry roast the chopped nuts until they are golden.
Cool the kheer well and serve with a garnish of the nuts.
This kheer tastes best served chilled.
You may opt to cook both the liquids together, or to grind both the soaked dhal and almonds together and proceed, if making a small quantity. That saves fuel and time.

If desired, you may also add few drops of almond essence that will enhance the flavour, though it is not necessary. The roasting of the dhal and the addition of cardamom are sufficient to make this kheer delicious.
For those who would cook with milk, reduce the quantity of water that you add to either paste; but you will have to cook them well until the raw taste is lost. Add boiled milk to the cooked mix and bring to a boil with the sugar.
You may also roast the garnish with ghee or any form of fat.
My earlier post on the regular Badam Kheer can be read in this page.
Posted by lata raja at 4:20 AM