No 'moar'-kuzhambu and eating vegan through a day 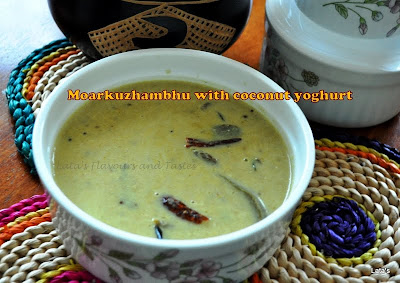 'What is there to change in a South Indian diet when most of it is nearly vegan' is what my husband commented as I discussed the idea of staying vegan through a day. I had to convince him to join in, you see. I listed out the dairy that we use on a regular basis and I could see that I might be losing his support.
Eventually, we agreed upon a menu, I suggested then that I will serve him black tea (for green tea would have put a full stop to the plans then and there). He chuckled thinking of the teas he might have at work, and agreed. To coax him enough, I made puri and kizhangu for breakfast and neer dosa for dinner! Having set that, I worked though the lunch where I had my trump card for him!
The one thing I had forgotten was the morning tea! Which household in our regions does not wake up to a steaming hot filter kapi or a blissful cup of chai? However, he was a good sport and had the black tea without fuss.
Thus a Saturday of cooking and eating vegan was otherwise novel. I had not thought it would be easy to forgo 'nei' and thick home set yoghurt even for a day!
I had earlier made the vegan cashew yoghurt from Harini's post and used in the Badami mixed vegetables recipe. The yoghurt had set so well and tasted very good that I used other ingredients to set yoghurt - peanuts once and coconut milk a few times.
The method I used was always the same; warm the coconut milk until moderately warm and drop about 15 chilli crowns in it and allow that to work. Initially, I had, without knowledge, used the second extract and found that the yoghurt was not as thick as I would like it to be.
With a few trials, I learnt that while the chilli crowns are indeed a good option, setting this with a bit of other vegan set yoghurt, for instance the cashew yoghurt, expedites the process. This yoghurt set in about five hours on warm days. I had planned to use this yoghurt and try the regular moarkuzhambu that uses a fair amount of churned yoghurt as key ingredient.
Having made up my mind on that, the lunch menu was also set : Vendaikkai vathakkal kari, vegan moarkuzhambhu, steamed rice and a kootu which uses a base of legumes (a recipe, I thought will help just in case my husband is not inspired to eat a vegan moarkuzhambu). 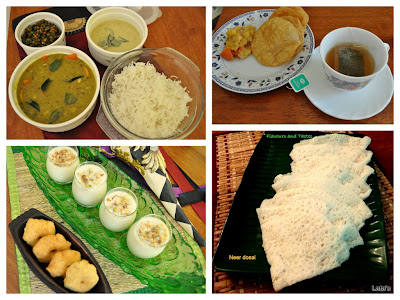 I have not posted the poori-kiazhangu until now; (I am making a mental note of that). Neither have I discussed vendaikkai vathakkal kari, other than from Aparna's recipe for a days' lunch. All of these will be posted in the near future.
However, today's star recipe is the 'Vegan moarkuzhambu'.

Method:
Setting coconut milk yoghurt:
Take one cup of first extract coconut milk in a bowl. Warm this on a moderate flame until the milk is warm. Do not boil the milk.
Remove from the stove and drop about 15 numbers fresh chilli crowns in the same.
Set this in a warm place and leave undisturbed for about six to eight hours.
The coconut yoghurt will set. Remove the chilli crowns and discard.
You might notice that the thicker yoghurt like substance is floating over some watery mass below. But do not worry. Stir the same and you have your yoghurt ready.
You may use, if you have on hand, some vegan yoghurt to set this and not use chilli crowns.
However, expect that this yoghurt does not set as thick as dairy yoghurt; nor it has the rich creamy flavour of the cashew/ almond yoghurt. You might sense a slight tinge of coconut oil also, if your coconut has been very mature. But this blends well while cooking and adds to the flavours. You will be surprised that this has a nice slightly sweet taste while it also has enough tang that makes it suitable to use in such dishes.
I have used it in aviyal the following day and carried for a potluck. My guests did not find it different, until being told that it was vegan. 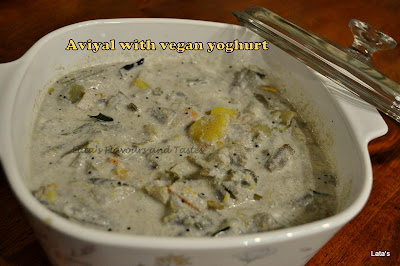 Use 1/2 cup of this yoghurt for the moarkuzhambu.

Method for the moarkuzhambu:
Cut the vegetables that you are using in the kuzhambu.
Take the vegetable and turmeric powder in a pan with water and cook the same.
Meanwhile prepare the paste as listed in the grinding.
Add about 100 ml water, asafoetida powder and salt to the paste.
When the vegetable has become tender, add the above and cook on a medium flame until the mixture thickens. Stir off and on to avoid forming lumps. 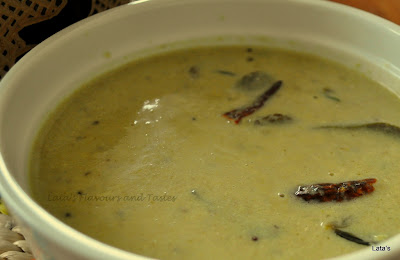 When the mixture has cooked well with all the raw tastes subsiding, add the coconut yoghurt.
Reduce the flame a bit and allow this to come to a boil. Reduce the heat to the lowest, simmer just for a few seconds and switch the stove off. Over heating will curdle the coconut milk.
Heat the oil for tempering in a pan. Add the mustard seeds and cumin seeds. Once they crackle, toss the curry leaves in the same and add this to the kuzhambu.
If you have fresh coriander leaves, wash them and add chopped leaves to the above. 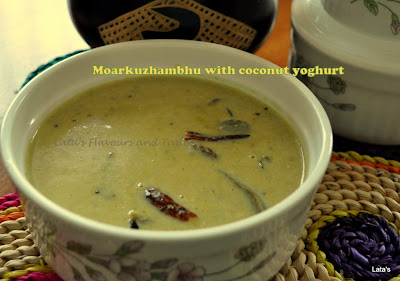 We did not detect that it was a non-dairy kuzhambu at all. It was just as good as the usual yoghurt based recipe. In fact I had an unexpected guest who found it hard to believe. That success gave me confidence to prepare aviayal with the coconut yoghurt for about a dozen others. Needless to say that was largely welcome too!

Added to the vegan cooking, that day as I had completed one reading of the Sundara Kandam, I prepared a no milk badam kheer (recipe is my next post) and urad dhal vadas for the evening.
A night's dinner with neer dosa and thakkali-vengayam chutney made a whole day of keeping off non-vegan products.

Harini is hosting a giveaway through the 12th of November. She had set this challenge and I wanted to join in. Thus this post came by and a thoroughly intriguing day long vegan meal. There is an interesting guest post by Preethi and Srinivas of Krya -creating vegan awareness in Tongue Tickers. Please have a look and I am sure you will also want to try the challenge, like I did.
Posted by lata raja at 8:15 AM