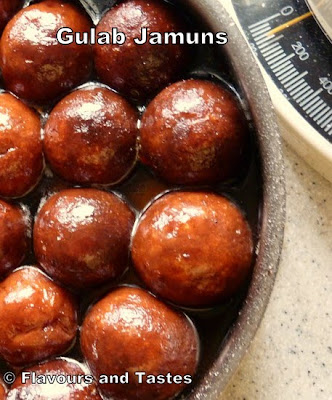 Having tried two of the three chosen recipes for the October edition of Indian Cooking Challenge for deepavali, I was planning to try the third given recipe sometime soon. Least did I expect it would be this soon. Srivalli, obliging to requests from members extended the post date to the 16th of November. That gave me a chance to work on this recipe and post it too.
Indo of Daily musings has given a very beautiful pictorial of her grandma making these jamuns for her. Prepare yourself for a tutorial here. I recommend you read her post, I am not copying it here.
With an overdose of yummy gulabjamuns, I did not want to use the whole recipe given by Indo.
I reduced 1 litre of milk and used one fourth of the rest of the ingredients as well. I had 20 gulab jamuns.
Three recipes, varying in quantity of ingredients, yet all three worked well, though I felt that the maida was a bit more in Indo's recipe. The gulab jamuns swelled in the oil while frying, so they absorbed the syrup well too.
This forced me to look up my mother's note book and I found her's almost similar to Indo's recipe! Later during a telephone conversation she told me that in her recipe the quantity of maida was more and she was advised to reduce it to achieve best results. The Baking soda she had mentioned was way less, may have been the reason to reduce the maida. I presume that might be a point of note.
Ironically all these days I never looked up my S.Meenakshi Ammal book. I fancied checking her recipe too. Alas ! What I found was neatly written in my own hand - an update. I have mentioned how much khova I achieved reducing 2 litres of milk and how much maida I had used, the exact measure of bi-carbonate of soda and more! I have written down how well I had to knead the khova initially, almost as you would knead the flour before adding the maida:(
All this dated way back in 2001! Deepavali -Johor!
Grrrr...gritting! Now I have to try my version soon :)